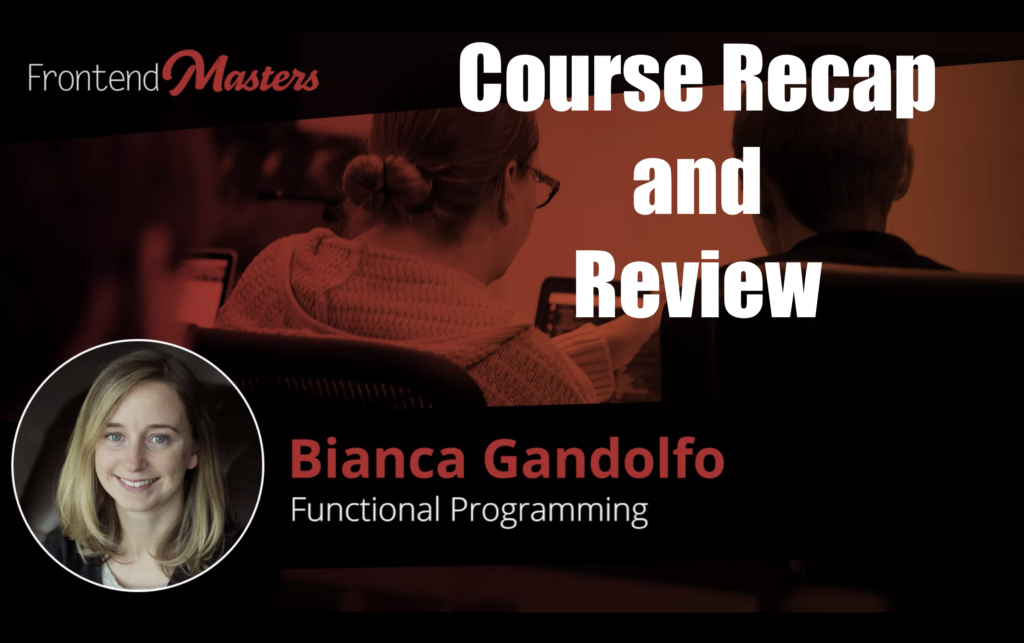 I just finished Bianca Gandolfo's 'JavaScript: From Fundamentals to Functional JS, v2' course on Front End Masters a couple weeks ago and figured I would give my two cents on the whole thing. Being its 8 hours long, not including the pausing you'll do to practice code and jot down notes, having a good idea of what you'll be presented with before plunging head first might give you an idea if its something worth investing the time in.

If you're a beginner or intermediate javascript developer, this class from beginning to end is absolutely worth the time invested. With Bianca's in-depth analysis of some more common JS fundamentals that we take for granted, you'll certainly come out of it with a better understanding of the Javascript language as a whole. My only critique is that the more advanced concepts of functional programming like compose and currying seemed to be rushed without going into too many fundamental use cases. People looking for expanded explanations of functional JS programming concepts may not find this course as helpful. Although most JS devs probably do not fall into that category so it's great for the majority of people.

Starting out, Bianca sets the tone of her class by telling the students that they will be called on to participate and that the coding challenges will also offer 'clues' . These clues are apart of a murder mystery game that Bianca has structured her class around to make the coding concepts more engaging.

Both of these qualities, student participation and Clue, gave the course an interesting and entertaining aspect. I personally hated being called on during class to answer questions in front of everyone but in this instance it works very well as a 3rd party viewer. A lot of the questions that may have been otherwise glossed over by Bianca were revisited because someone was called on and didn't understand a certain concept. This was a huge help for me because there was a handful of times I was royally lost and one of the students also had the same question I had when they were called on.

You can take a look at the course syllabus but Im going to list out the subjects below that I felt a much better understanding of after this course:

So one of my favorite parts of the whole course was the line-by-line walkthrough of Scope. I never really had a clear idea of how scope worked and seeing it thought out loud and talked about this way made concepts like Block Scope, Function Scope and Lexical Scope so much clearer.

Honestly the line-by-line code explanations in general was what made this class so special. She really took the time to make sure the whole class knew what was going on at a very basic level before proceeding. It also seemed like the majority of the people participating were in that beginner to intermediate category (just like me) so we were all somewhat on the same wavelength when thinking through these problems.

If you didn't read the TLDR version I had above, I did mention that there seemed to be a lack of content for compose and currying. This is just from my perspective as a beginner to functional programming. Maybe in reality those functional techniques aren't really used that widely which is why they were glossed over, but either way I sort of left those lessons with a barebones idea of what they were.

Well you'll have to take the course and get to the end to find that out. All in all Im very happy with the time I took with this course. It improved my understanding of some more basic JS fundamentals that I took for granted. If you're someone who uses methods like map, filter and callbacks but really want to know whats going on under the hood then this course is right up your alley. You'll also get a lot of interesting tidbits of info like ... an array is actually just an object! That one might have been obvious to some but she sprinkles a lot of little interesting facts like that throughout the course.

Oh one last thing before I end this. Throughout the course I started using this organizational/note taking tool called Notion. This thing is great, its like a notepad that was specifically built for developers. You can embed code straight to your writing with auto syntax highlighting. You can even include a functional Codepen snippet into your document. Its just clean and really a joy to use. Thought I'd give those guys a shoutout as I'll continue to use them for jotting down my notes from these courses on Front End Masters.