I Think Therefore I Am Not

I’ve been chewing on this thought for awhile now, it's one of those things that you have in the back of your mind but never really give it full attention. A recent podcast episode I listened to with Naval Ravikant really brought this somewhat shrouded thought to the forefront of my attention.

If you think about yourself from an outside perspective, you probably have a few attributes tied to your person that immediately come to mind. For example I think of myself as “goofy, imaginative, web dev, health conscious, geek, gamer, shoddy musician, generally optimistic, non-artistic, somewhat quiet…” etc.

I find that people, myself included, get tied extraordinary close with these particular attributes to the point where they’re self-fulfilling prophecies. One example that I think highlights this is how I considered myself a geek back in middle school and highschool. I loved gaming, music and tech and would take classes and hang out with people that shared these qualities with me. Funnily enough, we actually had about 4 trees in the quad at our highschool that all unofficially correspond to the kind of clique you were in. There was the "prep” tree, “freak” tree, “band” tree and “misc kid” tree. I floated between the “freak” tree and the “band” tree, kinda dual treedentities back then. I never remotely considered myself a part of the prep tree because all those kids were the popular, sports players and that was the furthest thing I identified myself as. Looking back, I never was that bad at physical activities. As a matter of fact, I was fast as hell. When doing any sort of foot race, I was almost always the winner by a long shot and I loved it. If I hadn’t constrained myself to this set of boundaries of a typical offbeat, gamer nerd then I more than definitely would have tried out for the track team or a similar sport. The identity of being a geek boxed myself in from considering other opportunities outside of that framework, which is only now apparent 10 years later.

A pretty common identity I see fairly often with others is aligning yourself with the “bad at math” crowd. This is an extraordinarily constraining box you end up shoving yourself into because so many times have I seen people use this label to stray away from career paths, projects and financial responsibilities. Possibly the most apparent identity blockades people use against themselves is aligning with a certain political party. You end up subscribing to a certain belief system purely because the party you associate yourself with does all the thinking for you. You're a democrat? You should then be a proponent for increasing taxes. You’re a republican? Then you’re against raising the minimum wage. Have different views on these topics? Well then you’re challenging the identity you align with so you either are more likely to erase those thoughts or have fun with cognitive dissonance. This is what I consider "Static Identity", meaning you're locked into a particular way of thinking and being whether you're consciously aware of it or not.

What has been most helpful and fascinating to me as of late is exploring how I can disassociate from these attributes and think of myself as an outside observer just having different experiences. It takes the burden of trying to live up to a certain standard that only comes from these labels. It’s not easy, trying to look at yourself as someone who isn’t anything, we naturally want to categorize ourselves into buckets because it makes it easy for us to point to something and say “that is something that I am”. But I’ve discovered that if you want to be self-aware of your own biases and feelings, you need to separate yourself from what these constructs tell you how you should behave and feel.

Since I have started disassociating from attributes I characterize myself as for decades, it seems to have sort of opened up some mental barriers I had unconsciously put in place. I recently had the urge to make pixel art, something I never really considered in the past. I don't think that option would have ever become a viable path as my brain would immediately remind me that I am not actually an artistic person and it would be very unfulfilling if I decided to go that route. I'm no longer associated with that “non-artistic” label I listed before, I'm just someone who hasn’t had much exposure to many artistic projects. It’s something that at any point in time I have 100% control in changing.

As a testament to my own philosophy of all this, I thought it would be fun to illustrate this mental model in pixel art. I created one image called “Static Identity” which is alluding to the restrictions we put on ourselves when we hold onto identities and do not look outside of those boundaries. The other image called “Dynamic Identity” shows how we view ourselves as an ever changing flow of ideas and interests. Normally, just writing an article about these thoughts would have been the extent of this post but I'm finding an immense amount of joy in trying to interpret these ideas into a visual format. So go ahead and smash those preconceived notions you’ve had about yourself, you might find yourself drifting in a direction that you didn't realize was possible. 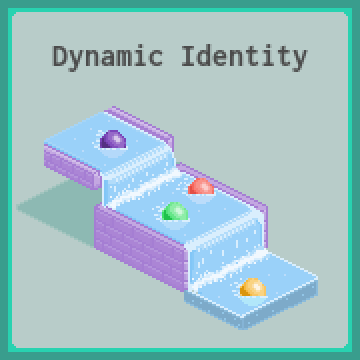